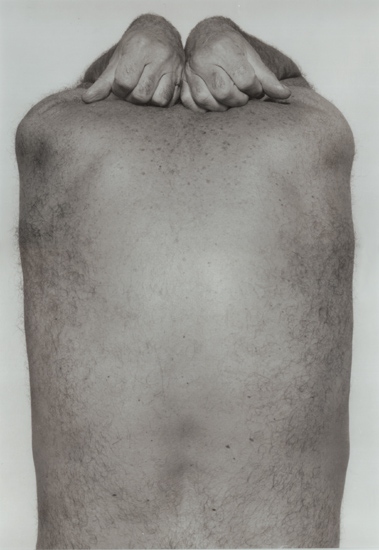 Self Portrait: Back and Hands
1984/1984
Silver print
unmounted
21-1/4 x 14-1/2 in. (540 x 368 mm)
Signed, titled, dated, numbered (6/10) in pencil and copyright credit reproduction limitation stamp on the verso.Born in London, England in 1920 John Coplans grew up in South Africa. Formally trained as a painter he migrated to the United States and in 1962 became the founding editor and editor-in-chief of Artforum magazine. He served as Director of the Akron Art Museum and the Art Gallery, University of California, Irvine, as well as the Senior Curator of the Pasadena Art Museum. In addition he has written several major books and articles on contemporary artists.In 1980 Coplans moved to New York and turned his attention to photography. In 1984 he began creating an ongoing series of self-portraits.Here is what the artist had to say about his work: "I don't know how it happens, but when I pose for one of these photographs, I become immersed in the past. It is akin to Alice falling through the looking glass. I use no props; I pose against a neutral, white background, and before I know what has happened, I am lost in a reverie; I am somewhere else, another person in another life. At times I'm in my youth. Sometimes (but very rarely), it seems that a contemporary event triggers the image, but when I think about it, I realize I have merely relived an episode that happened long before. The process is a strange one. I never know from one moment to the next if this power to time-travel will dry up, or what the next set of photos will be. My prints are straightforward; only their size and sharpness are subject to adjustment."He died in 2003.
Price: $12,000  Sale: $8,400 (ref. 8260)